Here are some fun ideas for Halloween Crafts that kids can help create...


Milk Carton Haunted Houses
Use any size of carton, from an individual sized lunch carton to a half gallon. Cut out a door and some windows and cover entirely with black construction paper. Add some cute halloween stickers and glitter, maybe some candy corn and pumpkins, and you have an adorable decoration that your kids can help create. For an extra spooky touch, add an LED tealight. Create one house, or an entire village!


Boa Bats
These would make great porch decorations! Add glitter and use different colors of construction paper for a more playful effect.


Printable Pumpkin Carving Stencils
Our favorite ones are the goofy faces!


Tie Dye Halloween
Create a fun tee shirt, onesie, pajamas or a trick or treat bag with this adorable craft.

http://familyfun.go.com/crafts/pumpkin-shirt-674600/
Posted by Natural-Beauty Photography at 4:00 PM No comments: 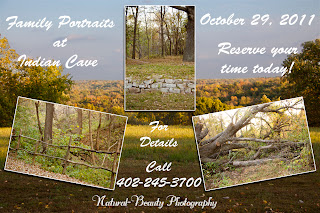 Autumn is one of the most beautiful times to take family portraits in a scenic area because of all the beautiful color nature offers.  We're going to be at Indian Cave State Park all day on Saturday, October 29th to take your family portraits.

We have several different locations throughout Indian Cave to take pictures that offer different looks for your portraits.  When you contact us, we'll help you decide where you want to take portraits at and set up a time for your session.  We're happy to take anything from your family group only to the family group, smaller groups (the kids, mom & dad, etc.) to individuals of each person.

Contact us today to reserve your session so we can Capture the Natural-Beauty of Your Family.

Some kids who are adopted often feel they aren't as good or as special as the other kids.  That is so untrue, but that's a whole different story.  Just because someone's adopted doesn't mean anything... they can still have great potential.

Do you know or remember someone who was a delinquent as they were growing up?  You always thought they won't ever amount to anything except being a trouble maker - or they'll be in prison all their life.  Maybe they just haven't found their calling yet.

What about someone who drops out of college?  They can't have any drive or be successful in life, right?  I personally dropped out after 2 years in a 3 year program.  I decided that it really wasn't what I wanted to do the rest of my life and there was no reason to continue on that path.  How about dropping out after just 6 months?  That's really bad - they didn't even give it a chance... they're really a loser, arnen't they!

Now let's put all of these together?  Someone who is adopted.... a delinquent through high school.  Drops out of college after only 6 months.....  gets fired from his job after doing it for 9 years.  This guy has to be a total loser!  This guy.....  is Steve Jobs.

Steve Jobs touched everybody's lives. Even as photographers, our lives have been influenced greatly by Steve Jobs. The post process editing we do on our computers, whether Apple or not (in my case, not), came about partially because of Steve Jobs.

Steve's innovative thinking and products will always be part of our lives.

Don't judge people too quickly.... they may surprise you!!!
Posted by Natural-Beauty Photography at 8:51 AM No comments: